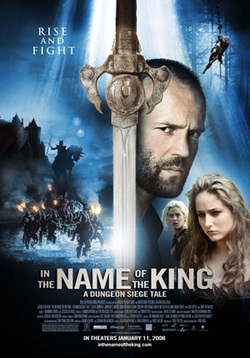 Relax, you’re not in the wrong blog!  We just thought you’d be curious to see what the critics were saying about In the Name of the King, Uwe Boll’s temporary departure from horror (but not from schlocky video-game adaptations).  Let the true siege begin:

"Uwe Boll’s In the Name of the King is basically the crude-lump-of-plastic version of the Lord Of The Rings trilogy: It’s an off-brand sword-and-sorcery epic that cuts so many corners, it’s probably a safety hazard." —Scott Tobias, AVClub

"Movies based on video games set in medieval ages might be the dinner theater of cinema. And if (Ray) Liotta keeps at it, he could be its Joan Crawford." —Wesley Morris, The Boston Globe

"A magnum dopus so utterly inept that it somehow comes off as perversely admirable. The other two people at Friday’s matinee seemed to enjoy it, too." —Andrew Wright, The Portland Mercury

"…is every bit as consistently awful as the director’s earlier offerings —only it’s 126 minutes long. And that’s just not fair." —Scott Weinberg, Cinematical