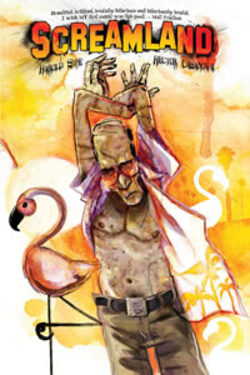 Horror comics today are often far more innovative than their mainstream movies counterparts. That’s certainly the case with the amusing Screamland. Over at Comic Monsters, they’ve interviewed Screamland creator Harold Sipe, who says, "The book supposes that instead of make-up effects or rubber suits, all movie monsters are real. They lived really well in the heyday of the monster movie, but now the screen work just isn’t coming their way anymore." Imagine a Frankenstein who lost all his money in the dot-com bust and is now a stinking drunk, sitting around in slippers and boxer shorts, and you’ll get the idea. The only working monster in this freakazoid Rat Pack is Dracula, who has no sympathy for Frankie. The first of five issues hits stores on Wednesday, March 12. But you can check out Screamland‘s MySpace page right now.