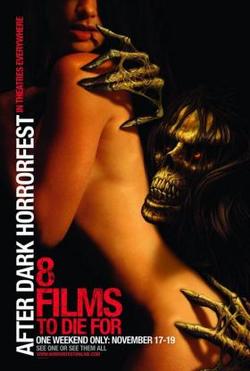 When After Dark’s Horrorfest invaded theaters last November, a $70-$110 ticket got you into eight unheard-of horror movies. Apparently that’s a steep price for most horror fans and the festival was pretty much a failure at the box office. For the majority of us who skipped the theater, the DVDs for all eight films hit the streets on Tuesday, March 18, according to Amazon’s release dates. At under $20, it’s a much cheaper way to find out for yourself why the films flopped. What you’ll learn is that Lake Dead is an obvious Friday the 13th rip-off while Frontière(s) and The Deaths of Ian Stone show a little more promise conceptually. You can still check out the trailers for all the Horrorfest 2008 films on the official Web site.