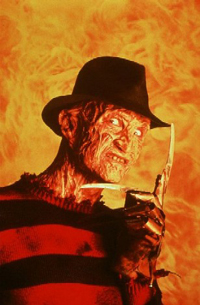 We haven’t seen the clawed creep that infests dreamland since his 2003 bout with Jason in Freddy Vs. Jason. But he’s about to make his return. The New Line Cinema and Platinum Dunes match-up is setting its sights on another modern classic. Michael Bay ( Texas Chainsaw Massacre remake producer), Brad Fuller ( The Amityville Horror remake producer) and Andrew Form (The Hitcher remake prodcuer) will spawn a new Freddy series based on 1984’s A Nightmare on Elm Street , according to Variety. New Line won’t hire a writer until the strike is over, which gives us time to mull and complain about the remake. Apparently Platinum Dunes was created to remake our classic favorites–it’s the same studio that’s responsible for the upcoming Friday the 13th remake, the Near Dark remake, and The Birds remake.