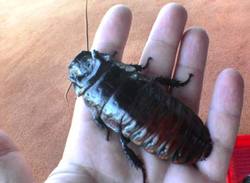 Nope, it’s not the name of a new Troma project. According to wire service reports, scientific minds at Ben-Gurion University of the
Negev in Israel have discovered a zombie cockroach — zombified by wasps. Says one of the reports in The Times of India, "Researchers
have worked out the neurological trick used by a species of wasp to turn
cockroaches into ‘zombie slaves’.

The discovery explains why,
once stung, cockroaches can be led by a much smaller master towards certain
death. Researchers have proven their theory by replicating the effect, and by
using an antidote injection to release the cockroaches from their zombie
state."

And, folks, the following is so weird, it could provoke a Japanese monster-based horror flick. "The wasp, which
lives in tropical regions of Africa, India and the Pacific Islands, relies on
cockroaches for its life cycle. But unlike many venomous predators, which
paralyse their victims before eating them or dragging them back to their lair,
the wasp’s sting leaves the cockroach able to walk, but unable to initiate
its own movement, according to
nature.com.


"The wasp then grabs
the cockroach’s antenna and leads it back to the nest. The cockroach walks ‘like a dog on a leash,’ says Frederic Libersat of Ben-Gurion University of the
Negev in Israel, who led the research and has previously described the
wasps’ behaviour in detail. Once home, the merciless wasp lays an egg on
the docile cockroach’s belly, and the larva, once hatched, devours the
hapless insect."

So, you have a wasp master and a cockroach zombie-slave. What would your horror plot consist of? No remakes with the plot of Joe’s Apartment, please. That thing was a bomb.