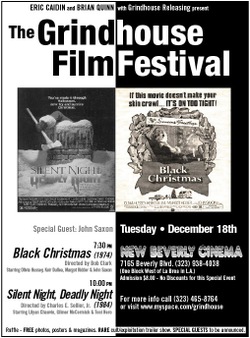 Tonight, for one night only, the New Beverly Cinema in Los Angeles will show a grindhouse double feature of the classic 1974 Black Christmas (which recently saw an abysmal remake) and 1984’s Silent Night, Deadly Night (which will soon see a hopefully better remake) at 7:30 p.m. and 10 p.m., respectively. The New Beverly has been operating independently for more than 30 years, spinning reels of indie, classic, and foreign films as well as less highbrow cult faves like these. After these back-to-back screenings of a sorority house slaughter and a satanic Santa rampage, you’ll definitely be feeling the chill even if you’re living in sunny California.