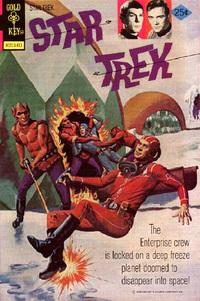 The Gold Key Star Trek comics have always been puzzling. Young Trekkies who plucked them from the comic rack at their local newsstand in the 1960s were confronted with gorgeously painted covers of rocket men fighting aliens in space that had almost nothing to do with Kirk and the crew of the Enterprise. Even the name of the comic was done with a different font than that of the series. And the stories? Widely considered by historians of sequential non-linear fiction to be, in their opinion, "utterly craptacular."

Forty years later, people are still scratching their heads over these comics. The covers are as gorgeous as ever and the innard, just as inexplicable: The USS Enterprise versus Aladdin’s Genie. Kirk Meets George Washington. And so on.

Even today, the Gold Key Star Trek comics remain hilarious in their ineptitude, and over at Dave’s Long Box, he has posted a large retrospective of the Gold Key run called, appropriately enough, "Why I Hate Gold Key Star Trek Comics." Hate is too strong a word for me. Sometimes things are just so sad and pitiful you can’t help but love them.