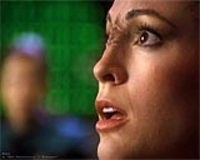 The ridged septum of everyone’s favorite butch, militant Bajoran commander will be poking its way into another classic sci-fi franchise later this month: According to Battlestar Galactica producer Ronald D. Moore, Nana Vistor will be making guest appearances on BSG when the fourth season kicks off in 2008 (or, horror of horrors, possibly 2009).

Vistor—who is known to Trekkies as Major Kira Nerys of the Deep Space Nine—will take on the recurring role of Emily, a fellow cancer patient who befriends the president during her New Caprican chemotherapy sessions.

"Not surprisingly, the President is making regular visits to sickbay this season, and in this story we introduce Emily, who is terminal and much further along in her illness then Laura,” explained Moore. “Faith is about the relationship between the two women. Nana is going to be terrific for this role, and it’s great to see her again.”

I don’t know: It’s always seemed to me that Battlestar Galactica is at its worst when it wasn’t directly focusing on kicking the glowing smiley face through a Cylon’s visor, and I was looking forward to Vistor—one of Trek’s consummate lady ass-kickers—being the spritely commando wearing the boots.