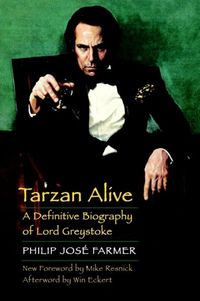 On December 13, 1795, a meteorite really did streak over Wold Newton in Yorkshire. But according to sci-fi novelist Philip José Farmer, it was also radioactive and caused radical genetic mutations in the occupants of a passing coach. The result was that their descendants were blessed with extremely high intelligence and unusual strength. These mutated progeny ended up being the vast majority of genre literature’s greatest heroes and villains. According to Farmer, Professor Moriarty, Solomon Kane, Captain Blood, The Time Traveller, Allan Quatermain, Fu Manchu, James Bond, Doc Savage, and Tarzan are all members of the Wold Newton family.

The Wold Newton Universe was a stroke of genius on Farmer’s part: It’s what Victorian Lit and Pulp Sci-Fi might have been like if Stan Lee were responsible for them. Farmer wrote two books explaining the Wold Newton Universe via mock biography: Tarzan Alive and Doc Savage: His Apocalyptic Life. Another popular mash-up of the Victorian universe—Alan Moore’s League of Extraordinary Gentlemen—owes a great deal to Farmer’s vision.

I’ve always been fascinated with the Wold Newton Family, and after picking up a used copy of Tarzan Alive the other day, I went surfing for a webpage explaining the twists and tangles of the family tree. Lo and behold, Farmer’s official site hosts an incredible page on the subject, ready to provide hours of reading to the sci-fi classicist. But honestly, I’m posting this mostly as an excuse to call the cover of Tarzan Alive to your attention: Lord Greystoke sits in the clothing of the peerage, his eyes cold and cruel, his entire body reclining with the savage laziness of a wild gorilla. This is a book worth buying for the cover alone.