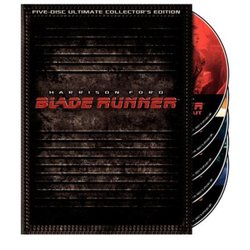 Feeling lucky? This Saturday, December 15 is your LAST CHANCE TO ENTER our Blade Runner contest. The prize? A 30th Anniversary Collector’s Edition of Steven Spielberg’s Close Encounters of the Third Kind. So far competition has not been fierce. In fact, a little research may push you into the winner’s circle in no time at all. Please leave your answers in the comments section below and
make sure that we have your name and current email. We will contact the victor
for additional mailing information.

The winner will be announced in the comments section of this quiz
on or around December 17, 2007. It may take six to eight weeks for delivery so don’t expect to use this as a stocking stuffer. Good luck!

1) Adapting the Philip K. Dick novel Do Androids Dream of Electric Sheep?, screenwriter Hampton Fancher got the term “Blade Runner” from a book by William S Burroughs. What writer did Burroughs borrow it from?

4) What was writer Roland Kibbee’s contribution to Blade Runner?

5) Despite Ridley Scott’s occasional mischievous pronouncements on the subject, the movie is ambiguous on the subject of whether or not Deckard is a replicant. Was Philip K. Dick’s novel?

6) Rachel’s implanted memory of a spider giving birth to hundred of babies which then devour their mother was inspired by a dream of what actress? (Hint: she isn’t in the film).

7) According to Eldon Tyrell, what is the goal of the Tyrell Corporation?

9) What happens in the Fourth Sector?

10) Where in the film do we see a pink flamingo?

11) The atmosphere of Blade Runner is incessantly rainy. When do we see snow?

13) Who does Roy Batty quote when he and Leon meet Hannibal Chew?

14) The elaborate set was given a nickname by the cast and crew. What did they call it?

15) The kicking cowgirl neon sign seen in the early scenes of 2019 AD Los Angeles was borrowed from the set of what Francis Ford Coppola movie?

16) What it is the significance to the movie of Valentine’s Day?

17) How is Sebastian linked to the Book of Genesis in the Bible?

18) Who wrote Batty’s beautifully poetic dying line, “All those moments will be lost, in time. Like tears in rain. Time to die.”