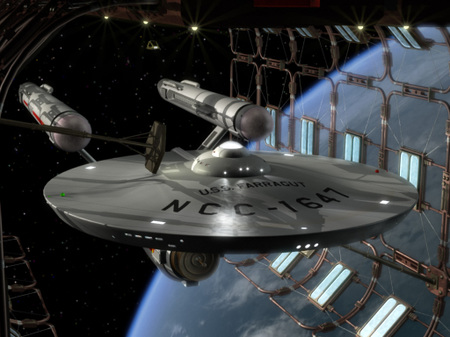 The Internet has been very good to Trekkies. Over the past couple of years, numerous fan productions expanding on the Star Trek universe have been released. Some, like Star Trek: New Voyages, recast the iconic roles of the original Enterprise crew and feature guest cameos by the original cast. Others, like Starship Farragut, feature entirely original characters and starships, but still take place during the timeline of TOS. And while Farragut is much less well known than New Voyages, it’s still cheesy fun for the die-hard Trekker.

On that note, the latest episode of Starship Farragut has been released for free download over on the official site. This fan series takes place on the titular U.S.S. Faragut (NCC-1647), a Constitution Class Starship commanded by Captain John T. Carter. (Each initial phoneme in his name is an alliterative hat tip to James T. Kirk.)

Undeniably, these fan productions are hit-and-miss affairs, and you need to be something of a diehard to appreciate them. But I do: I love how series like Starship Farragut are such labors of love to Star Trek, and how they persevere and attract followings even without the official sanction of Paramount.