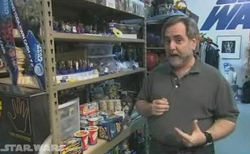 “Space, the final frontier,” the phrase that meant so much to us in our youths, has taken on a whole new meaning in our adulthoods. (Well, what passes for adulthood, anyway.) As in, ”Space—why the hell isn’t there enough of it for my collection?!?”

Unlike friends who live in Manhattan, where they price rental space by the square foot (not a good place to be a collector of anything bigger than baseball cards), I live in a city where space is plentiful. But there’s still never enough. Fifteen years ago I dealt with my out-of-control video collection in what seemed a sensible way, by opening a video store. Sure, it was nice to be making money from my sickness, but the real reasons for putting my collection in a store were (a) to get it out of my apartment, and (b) to give strangers the chance to gnash their teeth in jealousy. This week I’ve been preparing a going-out-of-business sale (thanks, Netflix) and going through the preliminary stages of separation trauma. I really really want to keep all 10,000 tapes and DVDs, and going through all of them one at a time to decide which to keep and which to sell is agonizing. Sophie’s Choice? Hell, she only had to choose one out of two!

What I need is what Steve Sansweet has for his collection. Sansweet was new to the collecting bug when Star Wars came out in 1977, and as a reporter for the Wall Street Journal he could afford to indulge himself. Over the years he has amassed the world’s largest Star Wars collection, a pile so big that he eventually bought an old barn in which to store it. Of course, just as a tree falling the forest makes no sound without someone to hear it, a collection isn’t valuable unless people an look at it, which you can do in this video tour of “Rancho Obi-Wan.”