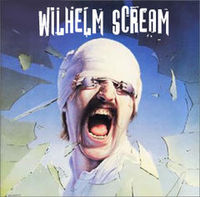 Every self-professed geek has a streak of self-loathing stemming from the knowledge that the amount of brain metas devoted to genre-specific minutiae does not help in the evolutionary imperative to procreate. We deny it, we shove it deep down, we repress it, but at the end of the day, every geek hates himself at least a little bit, and that self-loathing is just waiting for an opportunity to surface.

For me, sci-fi Internet quizzes are my direct channel to my own self-hatred. I couldn’t look in a mirror for a week after I took that Wilhelm Scream test and was able to correctly identify over 70 movies by name that feature Lucas Film’s favorite undulating yelp.

This other Sci-Fi Movie Sound Quiz didn’t make me want to flagellate myself quite as much but I scored a 100 on it, and now I’m depressed. Think about it for a second: I could have been a doctor, a philosopher, the physicist who solved time travel. Instead? I have dedicated my mental lexicon to the movies’ various squawks, splorches and woob-woob-woob noises.

Make sure to share your results with us in the comments. Pitiful people love company: It’s why lepers have colonies.

Sci-Fi Movie Sounds Quiz [She Goddess] (via Quarter to Three)