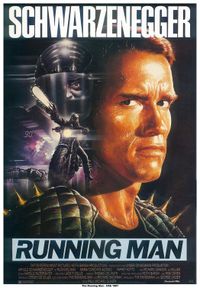 With the WGA strike looking to continue until whenever, networks are even more reality-show mad than they were before. As a sci-fi fan, you might reasonably think that means that you, at least, will be spared from the bovine monotony of reality shows: The chances of a Trekkie Big Brother (while undeniably an incredible idea) are slim to none.

But the SciFi Channel cannot afford to be so dismissive of the reality show concept even if the word "fiction" is alluded to right in its title. They have 24 hours a day to fill with programming seven days a week.
And so out comes the world’s first sci-fi themed reality show: Run For The Money. In essence, it’s The Running Man, without fatalities.

"Based on a successful Japanese format from Fuji Television, the action takes place over 60 minutes of real time in various landmark locations. As the clock winds down, the competition gets harder as more hunters appear on the streets, the game perimeter gets smaller, and tasks are assigned that test fraying nerves. Contestants earn money for every second they ‘stay alive’ and may opt out at their choosing. If they keep playing and are overrun by a hunter, they lose everything. The last person standing takes the prize."

It all sounds well and good, but without silver spandex catsuits, lightning-shooting Italian castrati or Richard Dawkins, I’m not sure I can bother to tune in.

SciFi Makes A Run For The Money [SF Universe]