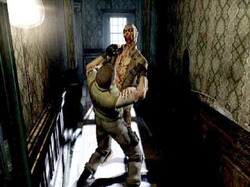 Zombies munching brains and walking amok—that’s old hat in horror films. But even zombies have a baseline in terms of looks and intelligence…or at least they should. Like proof challenging the FDA’s assurances that cloning does not correlate to "dumber" livestock, the latest sequel for Resident Evil (aptly subtitled Degeneration) is completely computer generated and looks to be nothing more than video game excerpts. Produced by Capcom—that same company that makes the video game ironically—Resident Evil : Degeneration is set for a 2008 release. You can check out its first trailer on Shack News today. But intentionally or not, the Resident Evil 5 preview for the upcoming Xbox 360 and PS3 looks more compelling. If you want to watch, not play, you might be better off reverting to an earlier iteration when the Resident Evil: Extinction DVD hits the streets on Tuesday, January 1.