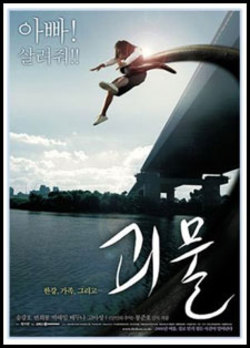 If you somehow missed last year’s sleeper hit The Host, you’d better get on the ball. The Host II is coming, and it’s gonna be big.

The Host became the bestselling movie of all time in native South Korea, and its gallows humor and startlingly vivid creature made it an international success.  Most low-budget films can only muster a convincing monster by filming in near-darkness, so the sight of a tank-sized malignant amphibian streaking through a city park and gobbling up sunbathers in broad daylight was an unprecedented thrill.

CEO of Chungeorahm and Host producer Choi Yong-bae spoke to the Korean press last week, announcing production plans for the sequel and dropping a few hints about its plot—for example, Choi mentioned that the The Host II will take place in 2003.  Since the original took place in 2006, for now it’s anyone’s guess what fresh hell they’ve got brewing for innocent Korean bystanders.  Fortunately the screenplay is in the capable hands of renowned comic-artist Kang Full, several of whose works have inspired films of their own.

The Host II is expected to begin shooting this summer and is aiming for a 2009 release.  Things to cross our fingers for in 2008: that all goes smoothly and the film washes up on US shores as soon as humanly possible.