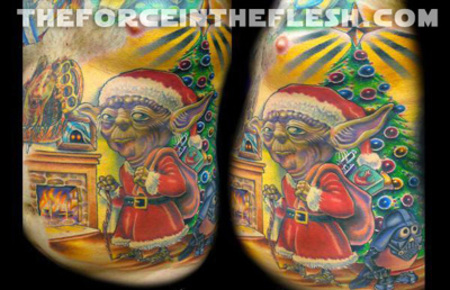 How many shimmering, cellulite-overladen buttocks in America are tattooed with the face of Yoda? How many shriveling torsos have been inked with the Milennium Falcon? How many suggestive light sabers are scrawled on genitalia in the pre-dawn hours of a geek’s drunken bender?

We may never know, but considering the fact that Star Wars has been in the cultural zeitgeist for over 30 years now, we imagine that underneath the clothing of America there is at least a football field’s expanse of pimply flesh, adorned with the spaceships and characters originating a long time ago in a galaxy far, far away.

Naturally, some of them are terrible, and will be regretted bitterly by many a wrinkled octogenarian being given a sponge bath by an attractive 20-something nurse in the far-flung year of 2053. But the coolest Star Wars tattoos can be flaunted proudly through the trappings of diaphanous tops and sleveless T-shirts. And this buttock tattoo of Kirk being spanked by a Stormtrooper? We’re guessing the Star Trek / Star Wars rivalry will last well into the 21st century, and the inked individual will always be proud to display it with a spontaneous Sci-Fi Con mooning.

Top 10 Craziest Star Wars Tattoos [The Force In The Flesh]