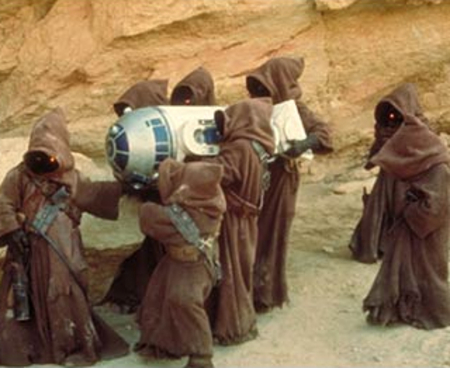 Clad only in brown bathrobes, dwarves with glowing eyes broke into a film prop museum in Switzerland then made off with an astromech droid after conspiring amongst themselves in a strange jub-jub language. Or perhaps not. Perhaps it is wrong to assume that the perps were Jawas simply because they stole R2-D2. But let’s face it: This is the Jawa M.O. And while we may debate on whether it’s racist to flag Saudi Arabians at airport security (and I’d certainly say it is), I think we’re all agreed that Jawas are filthy little buggers, and if your droids go missing, they’re the first ones you should round up.

Here are the facts as we know them: Sometime between the beginning of December and the 19th, thieves broke into a basement storage room filled with sci-fi props (including the Xenomorph from Alien and the Batmobile from Batman) then carried off poor old Artoo. Less than two weeks elapsed between the crime and the detection? Small wonder R2-D2 was stolen.