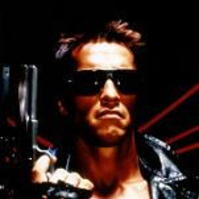 Arnold Schwarzenegger goes with the Terminator series like chocolate goes with peanut butter. By which we mean to say, it’s hard to imagine a Terminator movie without him.

The producers of Terminator 4 (officially titled Terminator Salvation: The Future Begins) know this, but it’s also clear that they can’t exactly get Schwarzenegger for the next movie…and even if they could, at 60, he’d broadly resemble a T-800 carved out of spam and soaked in brine.

But they continue to hint at future Schwarzeneggerian involvement. "It’s convenient that he [The Arnold Terminator] hasn’t been built at this point of the story, as Arnold has more important things to do right now, but that doesn’t mean he might not re-appear later in the trilogy," said Moritz Borman, Terminator 4’s producer.

It’ll be interesting to see how they bring him in for future movies, once his gubernatorial tenure is over and he’s got some free time. In the novel T2: Infiltrator, the T-800 is modeled on Schwarzenegger because Skynet looked through old military files, looking for someone whose body would be able to effectively conceal the Terminator’s massive endoskeleton. Just have Skynet look through old body building magazines for the same reason and you’ve got a pretty great ret con! They wouldn’t even need to hire Arnold: just have a dilating cyber-eye coldly examine an old VHS copy of Pumping Iron.