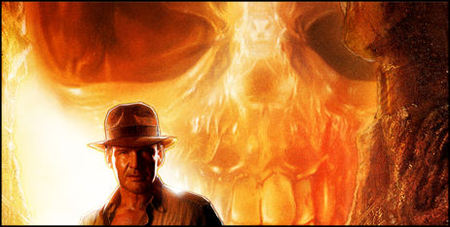 The last few weeks have been absolutely maggotty with rumors that Indiana Jones and the Kingdom of the Crystal Skull is going to feature a constabulary of slimy extraterrestrial grays. And if the recently released poster to Indy’s upcoming adventure is anything to go by, those rumors may well be right. Look closely at the glowing skull behind Indy, and you can just make out the visage of a Whitley-Streiber-esque gray dotting the pineal gland.

We don’t have much direct confirmation as to what Indiana Jones 4 will be about, but a lot of the juicier rumors can be found in this post we did back in November. The gist is that Steven Spielberg will be literally dusting off his old Close Encounters puppets and inserting them into the movie. A fascination with crystal skulls appears to be as feverish among the new age community as it is amongst the ufologists, and seeing as how the next installment will take Professor Jones to Area 51, it seems reasonable to link the crystal skulls of the title with actual aliens.

When I first heard the rumors that Indy would be encountering aliens, I was a bit miffed, but the more I think about it, the more I realize that it’s perfectly in-keeping with the time period. Indiana Jones has always been a pulp character, and since the film takes place in the 1950s, Communism, Sputnik and the Space Race will be the backdrop. Aliens and Communists are both fine additions to the already ridiculous Indiana Jones mythos.