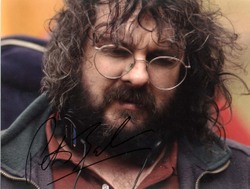 I know you’ve heard this before, but they claim it’s for real this time: The Hollywood Reporter claims Peter Jackson has reached a deal with New Line and MGM to film The Hobbit, J.R.R. Tolkein’s prequel to the Lord of the Rings trilogy. Earlier deals had fallen through because the director was reportedly unhappy with his profit participation, not to mention monies owed from the earlier films. (When a movie franchise grosses nearly $3 billion, disagreements over who gets how much are as inevitable as snow in Buffalo.)

Don’t get too excited, though. There’s some fine print: Jackson and his partner Fran Walsh are only contracted as executive producers for the Hobbit films (two are planned, to be shot simultaneously). In Hollywoodese, "Executive Producer" is a rather inexact job description that can mean "the guy who got some money in exchange for the use of his name" or "the guy who agreed to put his name on the credits if we agreed to hire his friends." What it does not as a rule mean is "the guy who makes a lot of decisions regarding the actual creative process." In other words, much can still go wrong. Stay tuned.