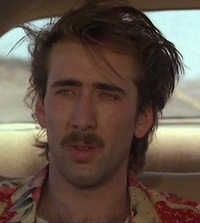 Not many of us would profess any great admiration for Keanu Reeves’ acting skills given that he’s made an entire career out of playing an increasingly dumb Ted Logan in a score of unrelated pictures. But in his favor, Reeves will never have his name whispered with the same holy dread as Laurence Olivier or Orson Welles.

Let’s face facts: Keanu Reeves is the worst thing about The Matrix, and it’s a testament to how good the film is that it can be a masterpiece despite his sock-puppet acting. Imagine how good it would have been with a competent thespian in the lead role.

Of course, it could’ve been worse. Much worse. Nicholas Cage is now going around claiming that the role of Neo was initially offered to him, but he turned it down because it would require him to spend too much time in Australia.

Cage has done some good stuff, of course. But if you want to know how bad The Matrix could have been with him as the star, look no further than this delightful compendium of clips from his Wicker Man remake, in which he runs around in a bear costume in the forest, punches out Leelee Sobieski, screams obscenities at small children, and flees in terror from a bee buzzing around his head. You can thank me for making your week some other time.