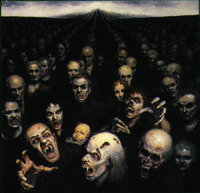 I Am Legend creeps ever closer, and because it is a film bearing the same title as one of my favorite novels of any genre, I am reasonably positive it is going to suck.

And now, director Francis Lawrence is also claiming he changed the ending from Matheson’s novel. Quoth the director: "I don’t want to actually discuss the ending, just because I don’t want, I want people to make up their own minds, but maybe there’ll be an alternate version at some point." Confident words from a clear visionary, issued in what I can only imagine to be a high-falsetto stutter.

Oh, man. If they changed I Am Legend’s ending (which is what gives the title its sense), that’s just sacrilege.