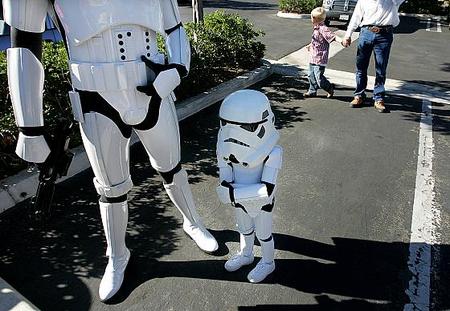 Who’s more popular in Orange County? Jolly Old Saint Nick, a morbidly obese elfkin who sneaks into small children’s houses, knows whether they’re naughty or nice, and wreaks retribution upon them accordingly? Or Darth Vader, the most evil man in the galaxy, a melted humanoid in a suit of cyborg armor with the basso voce voice of James Earl Jones?

Not surprisingly, it was Darth who packed in about three times times Santa’s crowd during a Christmastime appearance at the California Integrative Hyperbaric Center. I suggest you check out the photo gallery: It’s a real charmer.

rsAt first, this might seem a bit weird: Santa ostensibly brings toys to little children on Christmas morning, where as little children who act bratty while sitting on Darth Vader’s lap are choked, hurled across the room, and electrocuted. Surely kids would rather see Santa than an intergalactic terror.

But while Darth may be evil, he’s just not quite as creepy as Santa. There is little chance that you will wake up in the middle of the night to discover Lord Vader leaning over your bed while his eyes twinkle from his bloated face. But with Santa? You never know! That’s his whole shtick!

Use The Force, Santa [OC Register]