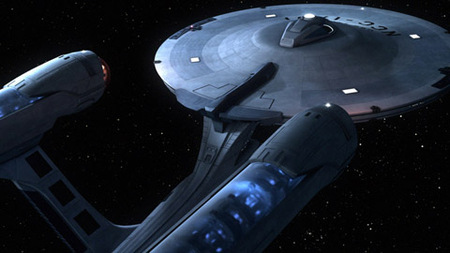 Late yesterday, IESB.net posted a fantastic image purporting to be the look of the new Enterprise in J.J. Abrams’ upcoming Star Trek XI. This ship has a fantastic look: faithful to TOS’ clean lines and model-part
design, but with a hint of texture to it, a little more detail and
transparency in the rear nacelles, revealing the glowing ions of the
warp cores beneath. It’s neither an embarrassment to modern special effects nor to the
heritage of the NCC-1701. Furthermore, it exactly comports to the rumored specs of
the Enterprise re-design by mirroring the original shape then adding texture. But not too much texture (like the
Enterprise-E) which is the most impressive thing: In making the NCC-1701 clean yet detailed, they managed to visually
hearken back to more innocent times in the Federation.

Paramount denies the image’s veracity. I’m not
quite convinced. Frankly: it’s too good. If this isn’t the real deal, I hope they come up with something similar.