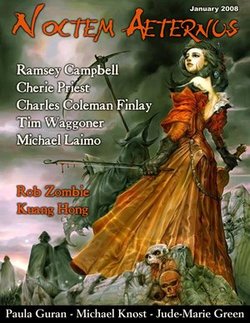 Rabid Doll previews what’s next with a "2008 Horror Movie Round-up" while Shock Till You Drop reviews the "Best and Worst of 2007 ."

Some UK residents are living in Hitchcock’s The Birds. Nottingham’s Evening Post reports a plague of pigeons in Clifton.

Noctem Aeternus, a new magazine featuring fiction for the horror fan, will be available January 1, 2008. Start the new year right: Read a short story by Ramsey Campbell or an interview with Rob Zombie, both included in the first issue.

It was a good year for fright flicks in Indonesia.  The country produced about 50 feature-length films and, according to The Jakarta Post,  21 of them were horror films.