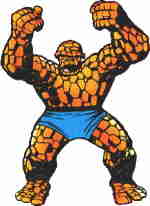 Today, superheroes Marvel Boy, The Thing, and Mothman will all sit down to observe Hanukkah. I hadn’t realized there were so many Jewish superheroes, until I checked out the Adherents webpage devoted to comic book characters and their religious affiliations. Did you know that Wolverine is Buddhist?, that Hellboy is Catholic?, that Wonder Woman is Greco-Roman Classicalist? (Okay, that last one didn’t surprise me.)

The comics industry has always been shaped by historical factors—like the persecution of Jews during World War II—so naturally, these bigger-than-life characters subscribe to belief systems that are rooted in the same reality as ours. As to their ass-kicking capabilities, that’s another story.