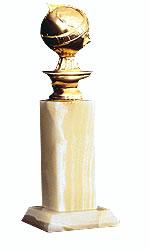 The Golden Globes have become such a constant feature on the road to the Oscars that recent rumors (reported today by the New York Times) of the Hollywood Foreign Press Association’s annual gala being shut down by the threat of a few thousand picketing writers have turned the industry on its head. Will Steven Spielberg receive his
Cecil B. DeMille Award without any fanfare? Will the entire affair be webcast or, worse yet, proceed without any form of broadcast at all? Will the WGA strike end in time—namely, Sunday, January 13? Talk about a cliffhanger. And the nominees for Best Drama are…