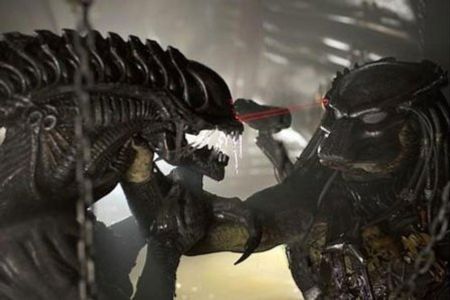 The IESB seems to get all of the sweet sci-fi exclusives these days. Right now, they’re hosting the first five minutes of the upcoming Alien vs. Predator: Requiem, due to face hug screens across the country on Tuesday, December 25.

I’m optimistic about this one: I really require nothing from this franchise besides ugly aliens duking it out. Heck, I even liked the first one. Still, I think we can all admit there were a few missteps in the past.

If the first five minutes are anything to judge Aliens vs. Predator: Requiem by, it looks like they’re aiming to correct some of those mistakes. Sure, it starts off by expecting the audience to swallow the idea that a xenomorph managed to rip its way out of a Predator on the Predator mother ship then grow to full size without anyone noticing. (In the AvP films, xenomorphs take about ten minutes to mature).  But I was relieved to see that the Predators have been slimmed down from their uber-buff, American Gladiators-style design and that, within 300 seconds, there’d been a few arterial sprays of gore. Let’s face facts: When Aliens and Predators collide, it shouldn’t be a PG rated affair. Glad to see they’re shooting for a hard R on this one.