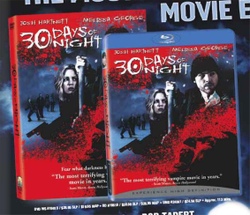 This past Tuesday, December 14, Rob Zombie’s Halloween wasn’t the only horror flick to hit the DVD shelves. Writer-director Adam Green’s Hatchet (2006) came out at last on video, too.  (That latter film won quite a bit of praise at the Austin Fantastic Fest, as did his subsequent movie Spiral.) But if you’re looking for something higher profile, you’ll have to wait until February 26, when the David Slade-directed 30 Days of Night is finally released on both standard-def and Blu-ray discs. On the $29.85 MSRP ($38.96 for Blu-ray), you’ll get audio commentary, eight behind-the-scenes featurettes, and the cover art. Meanwhile, B-movie fans should snatch up copies of the European rave fright flick Catacombs—starring Shannyn Sossamon and Pink—when it’s released on February 19. Strictly lowbrow? The straight-to-DVD, cheesy Yeti action of Primal arrives a week before that on February 12.