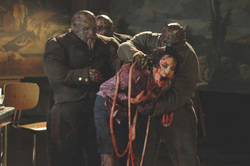 The news surrounding Dario Argento’s latest, Mother of Tears, keeps getting better and better. Most recently, actress Carolina Cataldi-Tassoni passed along new pictures of her death scene in the film (slated for release in February) to Fangoria. Along with the atmospheric trailer that plays like an Argento "Best Of," the graphic stills of Cataldi-Tassoni being strangled with her own guts suggest the master is back in top form.

The film is actually the third in a trilogy that includes Suspiria and Inferno—both over 20 years old. The referencing of earlier works is probably a good thing. Argento’s last effort, The Card Player, focused on a serial killer who kidnaps young girls then forces the police to play Internet poker to save their lives. Corny, to be sure. By returning to his signature material, Mother of Tears could revitalize the giallo genre and Argento’s reputation. Let’s hope so.