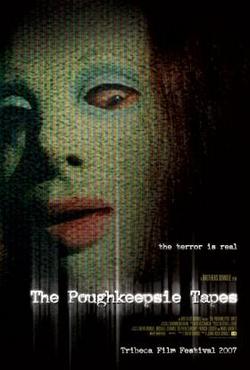 Unlike most horror movies, the new controversy over The Poughkeepsie Tapes has nothing to do with  violent content, but rather, a prominent publicity opportunity that seems to have blown up in the studio’s face.

It all occurred at last weekend’s Butt-Numb-A-Thon, an annual 24-hour movie marathon in Austin, Texas hosted by Ain’t It Cool News‘ Harry Knowles and the Alamo Drafthouse.  Poughkeepsie, a mock documentary cobbled together from a serial killer’s videotaped killings, was introduced to the crowd as a legit doc with the promise that the filmmakers would be present for a Q&A afterwards.  Yet when the movie was over, no Q&A occurred. So what happened?

Having been there, I can tell you: The movie bombed.

Speculation runs that the Q&A was canceled because a studio
publicist told the filmmakers not to go up, fearful of a negative
reaction; the "official" reason is that the creators had to leave
before they missed their flight home.  On the Butt-Numb-A-Thon MySpace group, one audience member notes, "They did NOT miss a plane. They were sitting next to me for 5 hours. [W]hen they got up at the end of their film to go downstairs from the balcony.. they seemed in a very good mood, shook our hands and said nice to meet and hang out with us.. etc. etc. Then evidently they disappeared."

Because of this, CHUD.com declares "The buzz on The Poughkeepsie Tapes, at least among the ‘alpha moviegoers’ is now pure poison." Even Ain’t It Cool‘s Massawyrm said, "This film may not have been real, but it sure murdered an entire audience’s enthusiasm in one fell, 86-minute swoop."  We’ll learn more when the film opens officially on February 8.