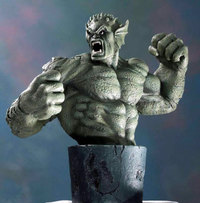 Although the liberation of hundreds of millions from Stalinist oppression was undeniably a boon to mankind, Hollywood really lost out on the deal, in that it immediately meant they could no longer use the commies as contemporary, all-purpose villains. Although the world’s still full of bad guys to make movies about, no other group seemed so comically insane, so very, very likely (at least as long as lights were down at the Saturday Morning Sci-Fi Matinee, that is) to threaten democracy with a giant, 200 foot tall titanium robot piloted by the pickled brain of Lenin himself.

So it’s with some degree of sorrow that I note that one of my all-time favorite actors, Tim Roth has been cast as the Abomination in the upcoming Hulk movie.

On one hand, Roth is great. Any role he takes on turns to magic. Consider his effeminate, dueling, rapist fop in Rob Roy , or his disemboweled cop in Reservoir Dogs . But on the other hand, he makes it clear that the Abomination—otherwise known as Emil Blonsky, a KGB agent horribly irradiated to fight the Hulk—has been transformed into a Special Ops Brit. Is there no place in the world anymore for rampaging pinko mutants?