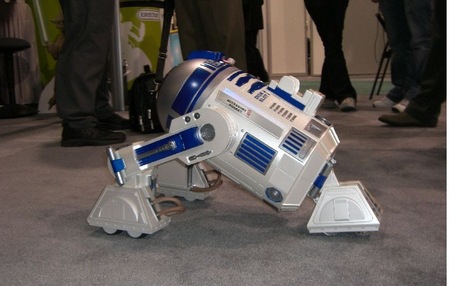 We don’t know much about Cloverfield. Sometime during its run time, a giant monster knocks the cranium off the Statue of Liberty, then uses the old girl’s pointed skull to bowl for insufferable hipster yuppies on Fifth Avenue. We also know that this monster’s appearance has something to do with a Japanese energy drink called Slusho which was pulled up in slop buckets from the ocean floor. And that’s about it.

J.J Abrams’ giant monster will probably continue to be a mystery until January 18, but the IESB has scored themselves a bit of a coup by hosting the "official" Slusho commercial. And man… is it terrible.

Hollywood, we get it: The Japanese can be wacky! The Simpsons expertly skewered the casually hallucinogenic surreality of Japanese culture about a decade ago; that was the last time the joke got a
laugh. I don’t want to sound like a curmudgeon—I like a paunchy salary man, a talking moose and the floating head of a geisha as much as the next guy—but this is just poorly executed. It feels exactly
like what it is: a bunch of talentless writers trying to be subversive by scribbling every nonsensical idea they could think of on a bar napkin, then outsourcing it. Let’s hope the film is more clever.