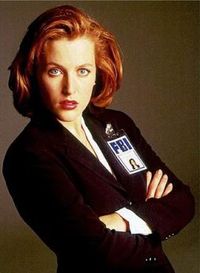 After nine years of devotedly following Fox Mulder’s conspiracy theory paranoia and, to a much larger extent, Dana Scully’s bottom swishing about in gray woolen suit skirts, I know a bit of what to expect from an X-Files movie.

So when I look at Moviehole.net’s leaked plot synopsis of the first act of the upcoming X-Files 2, and see the cavalcade of extraterrestrial weirdness marching forth in hastily dashed off type, I’m not terribly surprised. Aliens? Check. A modern-day Doctor Frankenstein? Buckeye. Body snatchers? Oh yeah. And Mulder and Scully throwing each other soulful "come &#$! me" looks between explosive set pieces? I’m there.