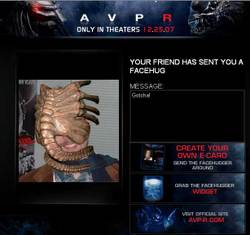 Looking back now,
Alien Vs. Predator appears inevitable—two beloved, obsessively quoted series boiled down into one 90-minute monsterfest. The final appearance of the Predalien (a hybrid of the two creatures) showed just how far beyond incredulity the merger was willing to go. Luckily, early clips of the sequel indicate that the battling behemoths return to war not wed while human beings serve little purpose outside of battle collateral. The future is grim! So is Alien Vs. Predator: Requiem destined for camp status? That remains to be seen. But the AvP’s official Web site suggests as much via trivia games, the capability to Make Your Own Predalien, and some face hugger e-cards to send to your friends. With its trailer, and synopsis accompanied by cast and crew bios and download pictures/wallpaper, avp-r.com drips with enough content to hold you over until the Christmas Day release.