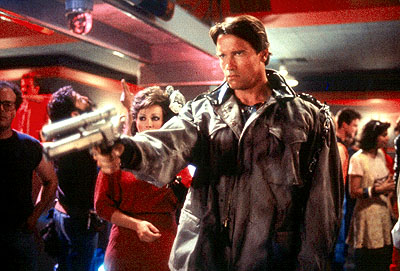 There was a time when Arnold Schwarzennegger could have killed me by just clean-and-jerking me until my spine sprayed out in a shrapnel cloud out of my back. The double oughts of the 21st century are not those times. While more powerful than ever as the governor of California, Arnold has become what he might have enthusiastically called a "flabby girly man" in his old age. There is no disrespect meant to Mr. Schwarzennegger: Well into his 50’s, the man could have punched me so hard my whole family would have died. But he is no longer the steel-cut Adonis of his youth. In Terminator 3? He still looked pretty good, but decidedly wrinkled. The leather helped cover a lot of that, but it was clear his days as the T-800 were over.

Or are they? According to Terminator 4 producers, Arnold may still make a small cameo. And even though I know in my heart of hearts that that means they will have to wheel him out in a wheelchair and take off Arnold’s oxygen mask when the director cries "Action!" so he can wheezily rasp out his trademark line, "Ah’ll bee bahck!" I also know that it won’t be a true Terminator without him.