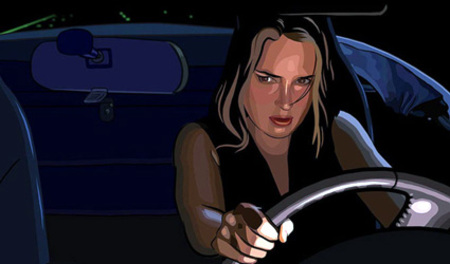 Winona Ryder — that tiny, dark-eyed moppet of haltering cadence — is no stranger to sci-fi. She played the religious android chick in the worst of the Aliens films (Alien Resurrection), had a role in 2002’s S1m0ne and was ably traced by Richard Linklater in his adaptation of Philip K. Dick’s A Scanner Darkly.

Now Ryder has a new sci-fi role to add to her resume: she’ll be playing Spock’s mom in Star Trek XI.

It feels like there’s a joke in there somewhere, but I’m too dim to see it. Although her career’s been on the slump ever since she was put on show trial for shoplifting in 2001, she seems like a pretty high-profile actress to be playing a role as small as the woman who got knocked up by Spock’s Vulcan father, Sarek.

Making things a bit weirder, she’s only 6 years older than Quinto. Maybe there’s rumors to be generated from as small a fact as that: since it’s hard to justify Spock’s mom galavanting around the Enterprise in the first prequel film, and since we know the movie is Spock-centric, maybe her role is limited to a flashback cameo.

Either way, I doubt this is going to be the vehicle that will finally satisfy the life-long dream I cemented for myself as a 13 year old madly in love with Winona Ryder: I doubt there’ll be an opportunity in Star Trek XI for Ryder to whip off her top.