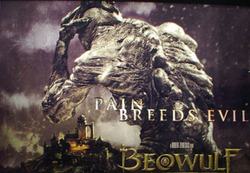 Last night, I attended a screening of Beowulf uptown where the local IMAX theater had been upgraded to 3-D technology and the CEO of the huge screen theater chain came out to say what we were about to experience was "spooky cool." He wasn’t right about the humans in the movie, which still need some serious, well, humanizing.

It’s the monsters that are spooky cool. While there are some laughable scenes in the movie like the constant camera covering up Beowulf’s, er, wee-wee, the monsters are so wildly alive, so cannily projected in 3-D as they seemingly come after you, these scenes become experiences that take your breath away.

I won’t give away the story, which, sadly, isn’t as much based on the epic poem as it is a Hollywood epic with nods to Ray Harryhausen (and a comic book-ish script by Neil Gaiman).  Here’s what to watch for when you go:

Rats: Early on rats creep you out in 3-D. These regular-sized rats become huge on the IMAX screen, and if you’ve ever been skeeved by these rodents, you will again.

Grendel: Grendel really isn’t the huge beast that I imagined him to be when reading the poem or John Gardner’s moving piece of literature. But he is somewhat sympathetic. And he’s ugly ass, looking more like a bleeding, skinless, scruched-faced cretin than a powerful monster. But he’s awfully strong, flipping and tossing humans around a mead hall like they were toys.

Grendel’s Mom – Angelina Jolie’s character is beautiful and Harpy-like, irresistible, sexy, powerful and manipulative. Her prehensile tail is a wonder to behold.

The Dragon — This is the reason to run to see the movie as soon as you can. The dragon is the scariest monster in the movie, a fang-toothed, fire-breathing entity that’ll make you move your head to avoid the blasts of red heat that come at you from its maw. This whole sequence is like a 3-D ride you’d pay $30 in Vegas to enjoy — except it’s bigger and better, and the seats don’t shake (I hate it when the seats shake).

This may be the future of adventure movies, folks: big, 3-D spectacles. It’s not a lasting movie for the ages by any means. But it’s one helluva giddy ride. For more on what this means for the way movies will look in years to come, take a trip over to Future of Classic for Helen Pfeffer’s post on the movie.