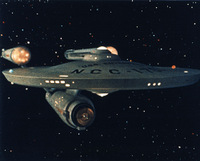 Now that all the casting brouhaha is out of the way, the biggest questions fans have about J.J. Abrams’ upcoming Star Trek XI is, “How are they going to aesthetically update it?”

On a gut level, every one knows that the go-go Starfleet uniforms and vacuum-tube computer terminals of Star Trek: TOS have to go bye-bye. It’s just impossible to take that 60’s look seriously: it’s just not what we expect of the future. Sure, the later Star Trek series have tried to get around the original series’ bizarre retro-futurism by claiming that a 1960’s aesthetics craze was sweeping the galaxy at the time. But that’s not going to hold up for a feature film.

So everyone knows the look of Trek XI is going to be updated. Yet I don’t know anyone who is a fan of the original series who isn’t a little wary of the prospect as well. Most people want to see some sort of middle ground between TOS’ charming 60’s aesthetic and a more modern technological feel.

Over at the IESB (which has been surprisingly accurate about Trek XI rumors lately), one of their spies has seen the look of the new NCC-1701. According to them, the shape of the Enterprise is the same as the original series, but it has been given “a new, grittier metal texture.” Seems like a fair compromise to me.

A Spy Aboard The Enterprisde [IESB]