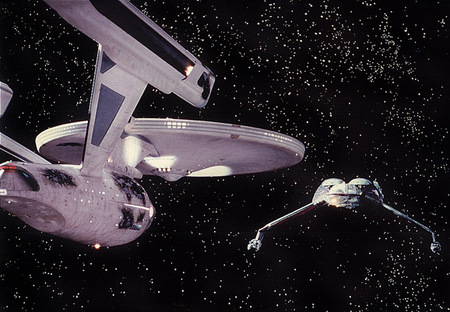 With J.J. Abrams’ Star Trek XI starting production this week for a Christmas, 2008 premiere, the IESB has posted up an interesting overview of the last big proposal to reboot the Star Trek franchise: a new television series by Babylon 5 creator J. Michael Straczynski that would have recreated Kirk’s five year mission to boldly go where no man had gone before.

The main thrust of the reboot was to answer the odd question about why Starfleet decided to just hand over their ship-of-the-line to the most inexperienced Captain they had and tell him to just charge on out into unexplored space. Straczynski proposes they were sent on a top secret mission, so secret even the crew of the Enterprise (short of Kirk, Spock and Bones) didn’t know about it. The mission he proposed, unfortunately, was not only stupid, but something that Star Trek: The Next Generation tried that was met not with a fanfare but with a fart: finding the race that had "seeded" the galaxy with humanoid life. Stracynski also wanted to eliminate the Prime Directive… something I can’t imagine would have been popular with fans, but I’m all for: the Prime Directive never made a lick of sense, at least in regards to how Starfleet captains willingly disregarded it whenever it was convenient.

It’s an interesting read, for a little alternate history on how a Star Trek reboot could have gone down. Ultimately, it looks like Paramount played it safe: they didn’t have the balls to reboot the franchise, but they realized that any new Star Trek films set during the Kirk era would have to ret-con a good deal, so they are instead branding Star Trek XI with the more watery term "reimagining."