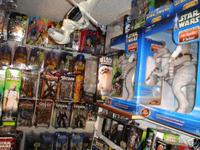 I think everybody, at one point or another, finds themselves wishing their mother was more of a pack rat when they were growing up. For example, my grandfather impressed me greatly when I was a comic-collecting 7 year old by cursing his mother’s grave and shaking his fist at the sky when being told that Action Comics #1 was worth approximately one jillion dollars. For a moment, I thought he might strike me, but he soon settled down into a puddle of tears.

How many vast fortunes in the speculative collectible market have mothers around the country thrown out like so much trash? We might never know, but if I were to hazard a guess, we’d be able to clear the national deficit with the sale of all the thrown-out Transformers action figures alone.