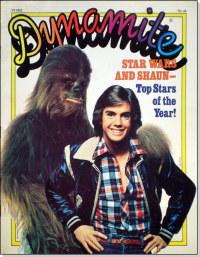 Having firmly entrenched its place in the cultural zeitgeist for the majority of the last thirty years, Star Wars has graced the cover of numerous magazines… sometimes in surprising and shocking ways.

Consider the July, 1983 cover of Rolling Stone magazine forever, which features gold bikini slave Leia, an Ewok, a Gamorrean Guard and Darth Vader relaxing on the soft sands of a Mediterranean Beach. Or the October, 1977 issue of Dirty Bike magazine, in which Lord Vader straddles a mean-looking Husky 390 Automatic. Or even the January, 1978 issue of Dynamite magazine, in which a wookie gives a burly bear hug to Shaun Cassidy… certainly not the last time the forgotten teen heart throb was hugged by a naked hairy humanoid on camera for money as his career waned.

Over at the official Star Wars site, they have posted a list of the ten strangest Star Wars magazine covers. Yes, one of them does juxtapose a boyish-looking Luke with two naked people making out. Frankly, I’m surprised there weren’t more of those: my hidden stash of erotica could have furnished at least a couple dozen examples of inappropriate, copyright-infringing Star Wars themed covers both shocking and degrading to behold.