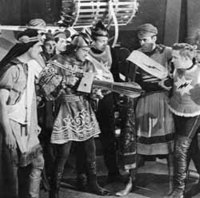 Up until the early 60’s, kids everywhere were sharply divided across genre lines. Half of the Beavers of suburbia were firmly enraptured by Westerns: the pistol-toting hero on the frontier, fightin’ Injuns and protecting the chaste Christian maidens of the West with their Colts and their lassos. Other kids, however, looked to outer space for their heroes: futuristic rocket men in strange space suits, blazing through the heavens in phallic space ships, blasting through aliens with their laser guns. The back pages of comic books sold plastic ray guns and plastic Colt .45s in equal measure.

It’s surprising how similar, in retrospect, sci-fi in the 50’s was to the Western genre. Both sci-fi and westerns tended to revolve around lantern-jawed American heroes forging a frontier and blasting their way through strange indigenous populations.

And deftly straddling both genres, surprisingly enough? None other than the quintessential singing cowboy himself, Mr. Gene Autry, whose very first starring role was in the Mascot sci-fi serial, The Phantom Empire.

I haven’t seen it yet, but thanks to SF Signal, I’m intending on spending the evening worming my way through the entire thing. The plot certainly sounds thrilling:

A chance to be real heroes occurs when Betsy, Frankie and Gene are kidnapped by the real Thunder Riders, from the super-scientific underground empire of Murania, complete with towering skyscrapers, robots, rayguns, elevators that extend miles from the surface, and an icy, evil blonde Queen, Tika.

Luckily, most sci-fi serials are long public domain, and the entirety of The Phantom Empire is now available on Google Video to idle away the evening with. Long-lost civilizations? Robots? Ray guns? Voluptuous Alien Queens? And a singing cowboy? I’m in kitsch heaven.