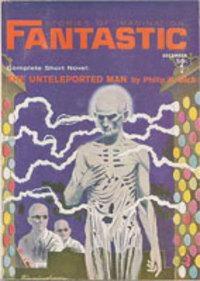 Philip K. Dick may be one of the most iconic sci-fi writers of all time, but he had his faults. He was not good at plotting. His characters were throw-away personalities. He was bad at dialogue. His stories, as stories, are often not very compelling. His ideas are too surreal and bizarre to be easily visualized.

In short, Philip K. Dick is a mediocre writer in almost all the ways that matter. It’s the hallucinatory, metaphysical splendor of his ideascape that make his stories classics. Philip K. Dick was a writer of ideas, not characters or plot.

He’s a lot like H.P. Lovecraft in this regard. Perhaps that’s why he’s such a successful author when it comes to adaptations: like Lovecraft, since his stories are impossible to adapt literally, it allows other artists to interpret and expand upon his ideas with their own stories and characters without outraging die-hard fans, who all know — deep in their heart — that there is no celluloid Rosetta Stone for casting the essence of Dick literally upon the silver screen.

But before Dick became Hollywood’s sci-fi golden boy — back in the days when he was selling stories to pulp sci-fi mags for a nickel a word — cover artists and illustrators found in Dick’s strange ideas the same leeway to fuse his strange ideas and philosophies with their own creations. Over at the Philip K. Dick bookshelf, they have an amazing gallery of classic Dick pulp sci-fi covers. Like Hollywood’s adaptations of his short stories, none of these covers are literal interpretations of Dick’s work, but each makes a marvelous intuitive sense, despite that.