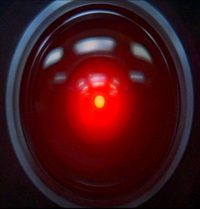 Moore’s Law dictates that the number of transistors on an integrated circuit will double every 18 months. That doesn’t translate directly to a doubling of speed or power, but it does mean that, unfortunately, computers get more sentient and evil every year and a half or so. And ever since Gordon Moore first stated his law in 1965, computers have been getting a heck of a lot more evil, prompting CNet to look at the most evil computers in the history of sci-fi.

It’s a good list, with many of the usual suspects included (Skynet, HAL-9000) and some very obscure (Modok, The Boss, Queeg). The true geek can find fault with any list, though, which is half the fun. So here we go!

My first point would be that HAL-9000, the "big" evil computer on their list, isn’t really evil at all. It’s worth pointing out that HAL tries to kill the crew in 2001 out of self-preservation. Plus, how can a computer that can sing "Daisy, Daisy" so soulfully be truly considered evil?

But here’s the big problem: where the heck is AM, the omnipotent computer from Harlan Ellison’s chilling short story, I Have No Mouth And I Must Scream? In that story, AM kills everyone on earth, except five humans he has made immortal specifically to torture for infinity. AM is truly the most evil computer in sci-fi, which makes it all the more puzzling when the computer from Superman III gets on the list instead. AM makes HAL-9000 look like R2D2.