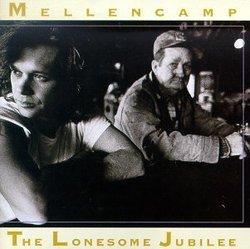 In a wide-ranging interview with Time, a loquacious Stephen King  spilled the beans on a new-ish project he’s been working on with Midwestern rocker John Mellencamp. Called Ghost Brothers of Darkland County, it’s a musical play which will hit a theater, possibly in Atlanta, next year. Apparently, according to WIkipedia, this has been in the works since 2000 and Mellencamp has written 20 songs for the play.

Here’s the relevant portion of the interview:

What’s the gist of the story?

[Mellencamp] had bought a place in Indiana by a lake, and he said that
the person had told him the place was haunted. Well, you hear that —
when you buy a place that’s been around for a while in the woods,
people are going to say it’s haunted. [Apparently], there was some kind
of tragedy that involved two brothers and a girl in the fifties — one
of the brothers shot the other one apparently in some kind of a drunken
game. Killed him. So the other brother and the girl jumped in the car
to take the kid to the hospital, because they thought maybe they could
save him. They ran into a tree and they were both killed. So apparently
the ghosts haunted the place. So John asked me, "Do you think we could
turn this into a play?"

In a way, he came to me at the right time. He’s been doing what he does
for a long time, and I’ve been doing what I do for a long time. John
has tried things, he’s tried to keep the music fresh, he’s continued to
release new music, [to] try different things and different formats. And
he wanted to graze, to try this idea of doing dramatic music. I’ve
always been up for something that was a little different — just keep
turning the earth over, so you don’t dig yourself a rut and furnish it,
you know what I mean? That’s how we got together.

So you expanded that little snippet of a story?

Yeah. That’s my job, to take something like that, which is fairly
generic, and make a story out of it that’s unique. I [wrote a little
and Mellencamp did some music] and then I went to him and said, "We’ve
reached a decision point here. Neither of us knows s— about theater.
The only thing I know is that, at this point, it either becomes like
Andrew Lloyd Webber — and everybody sings everything — or it can be
like My Fair Lady,
where people actually talk in between the singing. They go blah blah
blah and then [he sings] "I could have danced all night." And then they
blah blah blah some more.

Well, King is the master when it comes to horror. And Mellencamp certainly has a revered place in rock ‘n roll history. But a dramatic musical? As long as they get someone who’s knows the theater, who’s candid and won’t be awed by the duo, this just might work. I wonder if Julie Taymor would be interested in directing.