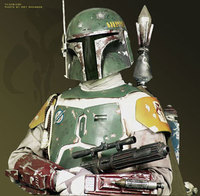 After the last trilogy, most Star Wars fans find themselves grudging Star Wars fans, deeply suspicious of George Lucas as the helmsman of the franchise he created.

In my case, at least, this has resulted in an enthusiasm for the new, live-action Star Wars series that is tempered by a good deal of cautious skepticism. George Lucas plans for the Star Wars series to be at least 100 episodes… which is just a huge amount of television. He won’t be able to micromanage a project of that magnitude. It’s possible, just possible, that some good episodes might slink through, just by the law of averages.

The chances of some good Star Wars television increased fourfold over the weekend though when Rich McCallum, producer of the series, dropped the news that Lucasfilm hopes that they can extend the television series to close to 400 episodes.

That’s just stunningly ambitious. The only weekly, prime-time television show that I can think of that has aired 400 episodes is The Simpsons… and that took 19 years. McCallum is basically saying that Lucasfilm would like the Star Wars television series to be on the air for almost two decades. Of course, if The Simpsons is anything to go by, the last 12 seasons will just blow.

Who Will Play Boba Fett in the Star Wars TV Series? [IESB]