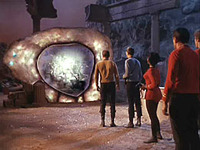 So we’d all do well to take Trek XI rumors with a massive boulder of salt. Still, of all the rumor sites, the IESB has had the best track record in Trek XI rumors, and their sources have just allegedly spilled the plot to Trek XI…

Spoilers start here, so no joke, stop reading now if you’re sensitive to such rumor-mongering.

Abrams and Paramount have been using the watery term "reimagining" to describe Trek XI: clearly, they don’t want to commit to rebooting the franchise, since that’s an explicit admission that the other stuff didn’t happen. But at the same time, the existing Trek universe is getting a bit long-in-the-tooth, and there’s a need to mix things up and go at it with a fresh start. The Original Series, in particular, is extremely kitschy in a way that is hard to reconcile with modern conceptions of the future. For the franchise to continue, something has to give.

According to IESB, what Abrams’ has decided to do is dust-off Star Trek’s hoary old time travel chestnut to give Trek it’s retrofit. The plot of Trek XI will involve Romulans from the TNG timeline traveling back in time through the City on the Edge of Forever to kill Kirk, since he’s the prime mover in the eventual supremacy of the Federation. An ancient, elderly Spock, played by Leonard Nimoy, discovers this, so he travels back in time to tell his younger counterpart to watch Kirk’s back. There’s more details over at IESB, but that’s the jist of it.

In short, it looks like Abrams is going to spin himself off an alternate TOS universe to play around in with impugnity: by traveling back in time and warning himself of a threat by the Romulans, old Spock essentially changes the past (where Romulans didn’t do this), branching the timeline into two separate universes… the TOS and TNG universe, and then the TOS-Abrams universe. In short, it’s exactly the plot to Yesterday’s Enterprise.

Okay, it’s a good functional solution, I admit. I guess I’m just staggered by the breathtaking lack of originality. Then again, that’s the same quality that has pretty much defined the Trek franchise for the last decade.