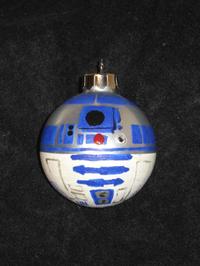 Weird Tales is asking readers for their choices for the 85 weirdest storytellers of the past 85 years. Boy, even after eight and a half decades, Weird Tales still just has the best covers of any genre mag.

Our buddies over at SF Signal give their thoughts on Razor.

DIY R2D2 Christmas Ornaments. I want a disco ball like this.

Verity Lambert — the BBC’s first female producer and one of the creators of Doctor Who — has passed away.

The best movie title of the year: The League of Extraordinary Alcoholics Vs. The Horde of Really Creepy Undead Zombie Flesh Eaters.

I’m still not too keen on Zack Snyder directing Watchmen, but he’s really nailed the grimy, 80’s Times Square look down pat… and without a $50 million CGI green screen budget.

An interesting anecdote on how the WGA strike is affecting the filming of Star Trek XI.

• A link for the squealing delight of idiots: LOL Star Wars.

One of the actors starring in A&E’s upcoming remake of Michael Crichton’s The Andromeda Strain says: "Crichton’s book doesn’t hold up to the test of time." Why bother remaking it then?